Do you have a Blocked Toilet?

Don’t put up with a blocked toilet for a moment longer than you have to. Metropolitan Plumbing can get things flushing again straight away with our 24/7 service! We provide long term solutions for urgent plumbing problems. 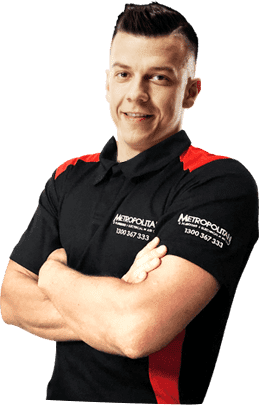 A blocked toilet is a nuisance and often messy. It’s not something you want to really deal with on your own. The good news is Metropolitan Plumbing has 24/7 emergency plumbers on standby for all your toilet plumbing needs.

We can take on anything and everything to do with your toilet and cistern. We’ll have it flushing in no time with a thorough, long term solution as well.

If your toilet suite simply is no longer up to the job we can also easily provide a replacement or install a brand new toilet supplied by yourself.

Throughout Australia, our team are available for fast service within an hour* of your call. That can include emergency plumbing or even general maintenance – we treat every job the same. Because we think that way, we also never charge extra after hours and offer $0 deposit, interest free payment options** for peace of mind.

That way your blocked toilet emergency doesn’t feel like something you have to put off because you’re worried about the cost.

To find out more about how we can help you, or to book a plumber now, just give us a call.

A blocked toilet can be caused by a surprising array of issues but, ultimately, it will be down to either a foreign object, a lack of water or a lack of air.

Most people know that the only things we should be depositing into a toilet are human waste and toilet paper. However, a staggering number of people like to use their toilet as a makeshift garbage disposal. Dead goldfish? Nope. Food waste? Hell, no. Nappies? No way!

And that’s not even taking into account the chance of blocked drains further down the line and potential tree roots inside your pipes.

Meanwhile, poor water flow could stop waste being carried out to the sewer system, leading to a nasty clog. Or it could be a vent stack problem.

It sounds odd, but without suitable vent air, your system could suffer from sewage backup. If your toilet trap is clear and the flow is good, a vent stack blockage could be the cause of your blocked toilet.

No matter the issue, Metropolitan has over 25 years of experience in toilet plumbing and our local technicians can assess and solve any problematic plumbing.

Our experience will help you get back on the throne, and enjoying your time in the bathroom again. Blocked toilets have to be fixed. But what do you do if the money isn’t readily available to pay for such a service?

With Metropolitan Plumbing you can easily arrange a completely interest free payment solution** so that the work can be done now, with payment conveniently spaced out over a period that suits you.

Working with Humm, Zip Pay and OpenPay, we provide a range of $0 deposit, interest free payment plans** for your pleasure. There’s no need to delay toilet repairs again!

You won’t have to put up with the gross inconvenience. Instead, you can have a Metropolitan plumber at your home within an hour* of your booking, hastily working on your repairs.

We know this is surely something you want, so contact us today for more information or to book a local plumber.

What causes a blocked toilet?

Foreign objects: Most people know that the only things we should be depositing in a toilet are human waste and toilet paper. However, a staggering number of people like to use their toilet as a makeshift garbage disposal. Dead goldfish? Nope. Food waste? Hell, no. Nappies? No way! Low flow: A low water flow can contribute to a blocked toilet. Some older model toilets can cause this issue. A low flow can potentially stop waste from being carried to the sewer system. Vent stack issues: A blocked drain can sometimes be caused by a lack of air and not water. It sounds odd, but without suitable vent air, your system could suffer from sewage backup. If your toilet trap is clear and the flow is good, a vent stack blockage could be the cause of your blocked toilet.

How do you fix a blocked toilet?

Many blockages are caused by human waste or toilet paper, which should breakdown in no time and leave you worry free. However, for more stubborn blockages the drain may need to be cleared externally and a plunger just won't cut it. Whether it's a tree root, build up of wet wipes and toilet paper - or something else altogether - you will likely require an electric drain cleaner or hydro jet drain cleaning machine. They will provide a thorough clean out, removing all offending material.

Is your landlord responsible for a blocked toilet?

For tenants and landlords alike, a blocked toilet is usually nothing more than a minor inconvenience which can be resolved with the use of a plunger. However, for more complex issues, it may be necessary for a plumber to inspect a blocked toilet. In this case, whose responsibility is it? Well, it depends. We always advise tenants and landlords to refer to local regulations which may vary from state to state. In general, it is the landlord’s responsibility to maintain the property’s plumbing and drainage. If, however, a blocked toilet is the result of tenant misuse (for example, flushing foreign objects such as wet wipes down the toilet), then it is the tenant’s responsibility to fix the problem.

Blocked Toilet Plumber Near You

We service all metropolitan areas of: Arrange an Appointment with the Award Winning Team!

If you have emergency or a general household problem, please fill in the form and one of our friendly team members will call you back within 3 minutes.

Whether it's a public holiday, weekend or late at night, we charge the same great rates across all services.

For all general maintenance and emergency services, we can be there within the hour and deliver same day services.

We offer $0 deposit, interest free options, as well as Zip Pay, so you can pay in easy and flexible instalments.

Great customer service, very informative and helpful, fast job completion, highly recommended. Will use again in the future if needed. Great advice, polite, five stars. Tyson did a fantastic job and would recommend the company to anyone.

Rick arrived within the hour and was diligent in autopsying the wall and ceiling to find the source of the leak. He found that it was an issue of pipe pressure. Our wall and ceiling are safe with no more leaks!

Contacted the office and Andrew was here the next morning. Very polite. Gave me options. Cleaned up afterwards. Would not hesitate to use again. Highly recommended.